I was asked by Dave Griffiths of Notts.CTC to contribute to the "Spotlight" feature in Cyclonda. My response appears below as I thought it might be of interest to others. If editors of other mags. are desparate for copy they are welcome to use it.

1. What type of cycling gives you the greatest buzz?
I just enjoy being on  bicycle, particularly on a lovely spring morning, and that can be on a trip to the shops or a long ride in the countryside. I'm of the view that you can usually find something to enjoy if you look for it - or in the words on the Monty Python song from "the Life of Brian" - always look on the bright side of life.

2. When and how did you get serious about cycling, and when did you join the CTC?
The use of the word "serious" raises some interesting philosophical questions.

I could go on. To my mind anyone who pushes pedals is a serious cyclist who I want to encourage.

I've cycled since the age of 6 and whilst mileage have no doubt varied considerable, I don't think there has ever been a year when I haven't ridden a bicycle. I joined the CTC in 1988.

I suppose the Randonneur would be my favourite, it was my first "proper" touring bike and I've probably done more miles on it than any other.


4. What can you tell us about your first bike?

Pre-war, make indeterminable, with rod brakes and repainted red. Here I am, age 6, on it on 25th March 1957 on the promenade at Walmer, Deal having just achieved the ability to balance. 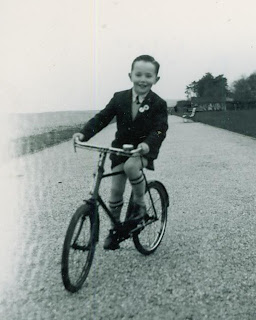 5. Do you undertake all of your own bike maintenance?
No, but I do quite a lot of it. All depends on time and how difficult the job is. I bought the Clements for £35 on ebay, stripped it down, put new ball bearings in the head-set and re-assembled as a 3 speed so I can do quite a few of the jobs, although I wouldn't attempt to disassemble and re-assemble a hub gear (the real test of a bicycle mechanic :-) ).

7. Which is the best place that you’ve visited with a bike?
If the question refers to an area then I would nominate the Welsh Marches but for a particular place I would say the Military Road on the Isle of Wight.

8. And the most disappointing, with or without a bike?

Gosport Marina. Back in 1972 I was a member of NatWest Sailing Club. I was invited down to Gosport to sail on the Bank's 38 foot yacht for a weekend and warned them that I would be arriving around 10pm as I had to travel from East Kent. I arrived only to find (after much fruitless searching) that the berth where I had been told the yacht would be moored was vacant. They had sailed and I had to find my way back home to Deal in the small hours.

9. What was the most memorable cycle ride that you have made, and why?
Probably my first real tour when I took the train to Crewe and cycled back to Southampton through the Welsh Marches.


10. Do you have a favourite local ride?

I suppose one that I often make when I just want to get out for some exercise for a couple of hours is to take the track south from Loughborough to Woodhouse (at Beaumanor Hall) and then head up to Beacon Hill, then towards Copt Oak taking the left turn into Whitcrofts Lane and then on to Newton Linford and home through Bradgate Park (not to be attempted on a busy weekend).

View Larger MapDriving Directions
11. What about a favourite café?

I help maintain this map of tea rooms for Leicestershire and Rutland CTC which shows some others.

12. If you’re touring, what’s your preferred accommodation? Are you a camper, a hosteller or do you prefer a hotel / guesthouse?

I'm not a camper unless there is no alternative, but am quite happy to use youth hostels (I'm a life member of the YHA). With the family we have found Travelodge family rooms (particularly the £9 offers) to be very attractive.

13. Do you have a favourite Youth Hostel?

Ilam Hall - I like to take a wander around the grounds.

14a. What, if anything, would you most like to see changed within CTC?

There are many areas where I think we can improve the organisation but I believe it is essentially sound as evidenced by the increasing membership. We are a very "broad church" and attempting to keep all the various types of member content is quite difficult. By way of example many of our older members want to retain paper based systems and some would even like to see runs lists and free adverts in Cycle. Several have told me they have no intention of ever using the internet. Others are completely up with the technology and expect the CTC to be prominent on social networks. Servicing all these means of communicating with members has made many things more complex. However, I confident that over time we will continue to evolve and improve the organisation.

Areas where I think we particularly need to improve are the National AGM, which with proxy votes is no longer an appropriate means (if it ever was) of obtaining member feedback. I tend to the view that we should have an annual conference and dinner at which the future of the CTC can be discussed. Another area of concern is the groups. The present arrangements are based on a compromise that attempted to reconcile several different conflicting aims. This is now being reviewed. But however we look at it many groups have ageing memberships and are failing to attract new members. I went down to Hampshire last year with my daughter and we went out with the Southampton group which I had ridden with 20 years ago. Apart from my daughter, every single rider was somebody who I had ridden with 20 years before. It certainly made socialising much easier, but I fear that this situation could apply in quite a number of groups. We need to find ways of assisting groups to attract new riders.

14b. What made you decide to become a CTC Councillor?

I was persuaded by committee members of CTC East Midlands . I'm already involved with several other organisations, so I was reluctant to commit to the time required, and only agreed on the basis that I would give priority to previous commitments. I'm hoping somebody else will be prepared to stand at the end of my term (election next year).

15. Do you have any notable cycling achievements?

Don't think it counts as a "notable achievement" to anyone else, but a 300k audax run by the Southampton DA back in 1989 across Wiltshire. As I cycled to the start and home again I did 200 miles in the 24 hours. It was a great ride across some lovely countryside along with good companions.

16. Have you any other interests apart from cycling?

Quite a few, including my wife and two daughters of whom I'm immensely proud.

I also enjoy reading and, when I can, to get a sail in at my old club, Down Sailing Club.

Difficult. "The Life of Brian" is a film that I usually spot something new in on each viewing. I've also been digging our some old black and white classics (very cheap on DVD) - in particular its been good to take another look at "Inherit the Wind" and "To Kill a Mockingbird".
As to musicians, I tend towards classical music, but as an individual musician I think I would nominate Humphrey Littleton, an admirable musician and human being.

18. Do you have a pet hate or something that really annoys you?

Yes, people who expect me to do things for nothing so as to save them some money.

19. Who, if anyone, has had the biggest influence on your life?
Mainly my parents and family. I've met, worked and played with many people who I have admired and to some degree emulated, but I couldn't pick any one person out in particular.
20. What else can you tell us about yourself that members of Notts CTC might not know?

My main sport for 25 years was dinghy sailing.
Posted by Web Master at 14:51